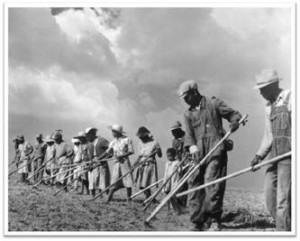 We are now well into Lent and I think about the gift of music God has given us. Kurt Vonnegut, author of Cat’s Cradle and Slaughterhouse Five once said “If I should ever die, God forbid, let this be my epitaph: THE ONLY PROOF HE NEEDED FOR THE EXISTENCE OF GOD WAS MUSIC”

We owe a great deal to the African slaves of our country’s early existence. Before there was gospel music they gave us Negro Spirituals.  From the website Black history: the origins of the spirituals we get a little understanding into the significance of this music in their lives.

For a time, the slaves simply by-passed the New Testament, especially since their white taskmasters used it to justify slavery. But there was something about the man Jesus, hanging there upon the hard, wooden cross. Here was a man who was beaten like they were. He was spit upon. He was falsely accused. He was imprisoned for a crime he did not commit. Finally, he was hung on a tree, a method of execution familiar to the slaves. Through all of these indignities, Jesus prayed, “Father forgive them, for they know not what they do.”

“How was he able to forgive?” they questioned. “What was it that enabled him to love those who were unlovable?” Was he in pain? They were in pain. Did he have to drink the cup of suffering? They had to drink theirs, too. Yes, their cross was one with his cross. Jesus died for the sins of all men, of every color. He had to be who he said he was. How else could he have done what he did? In time, they embraced Jesus as their Savior, and they experienced His peace, His grace and forgiveness, and His hope for the future.”
From this relationship they were able to sing:

This Negro spiritual became a staple in the hymnals of white congregations in the 1940s and is traditionally sung this time of year. Here is a version I particularly enjoy. I hope you will too.

5 Responses to Were you there?