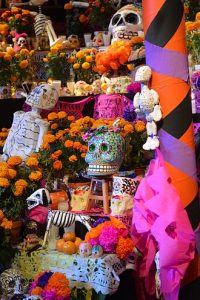 Día de los Muertos, or Day of the Dead, is a celebration of life and death. While the holiday originated in Mexico, people celebrate this holiday all over Latin America with colorful calaveras (skulls) and calacas (skeletons). Learn how the Day of the Dead started and the traditions that make it unique.

Aztec, Toltec, and other Nahua people considered mourning the dead disrespectful. For these pre-Hispanic cultures, death was a natural phase in life’s long continuum. The dead were still members of the community, kept alive in memory and spirit. During Día de los Muertos, they temporarily returned to Earth. Today’s Día de los Muertos celebration is a mash-up of pre-Hispanic religious rites and Christian feasts. It takes place on November 1 and 2 (All Saints’ Day and All Souls’ Day on the Catholic calendar).

People place a collection of objects on a ritual display during the Día de los Muertos celebration. An ofrenda is usually created for an individual person who has died and is intended to welcome them to the altar setting. Also, it may be quite large and elaborate. Marigolds are the main flowers used to decorate the altar.

A common format for an ofrenda contains three levels or tiers.

Calavera means “skull.” But during the late 18th and early 19th centuries, calavera was used to describe short, humorous poems. They were often sarcastic tombstone epitaphs published in newspapers that poked fun at the living. These literary calaveras eventually became a popular part of Día de los Muertos celebrations. Today the practice is alive and well. You’ll find these clever, biting poems in print, read aloud, and broadcast on television and radio programs.

Food of the dead

You work up a mighty hunger and thirst traveling from the spirit world back to the realm of the living. At least that’s the traditional belief in Mexico. Some families place their dead loved one’s favorite meal on the altar. 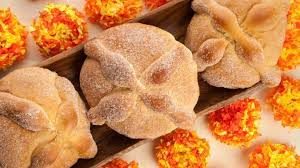 Pan de muerto, or bread of the dead, is a typical sweet bread (pan dulce). It often features anise seeds and comes decorated with bones and skulls made from dough. The bones might be arranged in a circle, as in the circle of life. Tiny dough teardrops symbolize sorrow.

Sugar skulls are part of a sugar art tradition brought by 17th-century Italian missionaries. Pressed in molds and decorated with crystalline colors, they come in all sizes and levels of complexity. 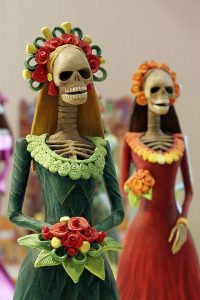 Day of the Dead is an extremely social holiday that spills into streets and public squares at all hours of the day and night. Dressing up as skeletons is part of the fun. People of all ages have their faces artfully painted to resemble skulls, and, mimicking the calavera Catrina, they don suits and fancy dresses. Many revelers wear shells or other noisemakers to amp up the excitement—and also possibly to rouse the dead and keep them close during the fun.