John & Yoko: Above Us Only Sky 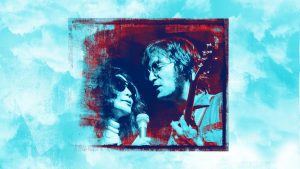 Death hasn’t been kind to John Lennon. Actually, death is never kind, nevermind one as brutal and gruesome as the former-Beatles’ public assassination in 1980. It does seem, however, that in the decades since his murder, his legacy has been tarnished. Stemming from unflattering biographies, memoirs from those who knew him, and, in some cases, his own words. The reputation of his widow, Yoko Ono, meanwhile, has been somewhat rehabilitated. (Though, to be quite fair, the only place it could have gone is up). Since entering The Beatles orbit in late 1966, she has been unfairly blamed for Lennon’s every gaffe. As well as for the actual breakup of “The Fab Four,” a ludicrous assertion.

John Lennon was between two worlds at the dawn of the ’70s. He had quit The Beatles in late 1969, the same year he bought Tittenhurst Park, a 99-acre estate in the countryside west of London. According to assistant and photographer Daniel Richter, “He liked to sit in bed, playing guitar, smoking dope and watching television.” Weary of people who either worshipped him as a pop star or thought of him as a counter-culture pariah, his new home became a refuge. In 1970, he released the sparely recorded and emotionally flaying John Lennon/Plastic Ono Band album (my personal pick for his greatest solo work), which, though critically lauded, was not an immediate hit. As he sang in that album’s “God”: “I was the walrus / But now I’m John.”

Hungry for the commercial success he had as a Beatle, Lennon began working on a new record at his newly built home studio. Famed “Wall Of Sound” architect Phil Spector was once again producing. And former bandmate George Harrison was on hand, playing guitar on half the album. Session footage is too cool, with the musicians playing off each other and Lennon walking them through the arrangements. Other songs spoke to Lennon’s political beliefs, behavior which can be traced back to 1969’s “Bed-In For Peace”. An effort protesting the Vietnam War, a public act which bore all the hallmarks of Yoko Ono’s conceptual performance art.

Among the album’s standout tracks is “Jealous Guy,” whose chords twist and turn in unexpected and beautiful ways. Of course, the album is best known for “Imagine,” its title track. It is the song that bears the signature of Yoko Ono, inspired by her 1964 book of poetry Grapefruit. Ono, who appears in the film says, “The fact that John and I met was to do this song.” She was not initially recognized as a writer. In 2017, she received a co-writing credit. The National Music Publishers Association recognized “Imagine” as the most influential song of the last 100 years.

In many ways, John & Yoko: Above Us Only Sky is an effort to set the record straight on the couple’s relationship. The Japanese-born Ono was an established artist when she met Lennon at one of her gallery shows in 1966. They were a “merged unit,” according to friends, and reflections of each other. In the end, we are left with a moving portrait of the couple as two ambitious thirtysomething artists engaged with the world and enamored of each other, Ono being the calming Yin to Lennon’s energetic Yang.

John & Yoko: Above Us Only Sky, is currently streaming on Netflix.