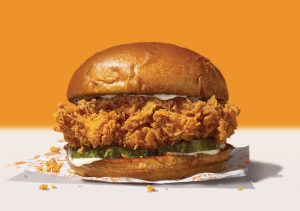 Perhaps it is only fitting this day and age. It seems there is nothing more American than being divided over something. This week it’s a chicken sandwich.

And from that moment, it was ON. People began ardently advocating for their favorite sandwich, whether it be the new-kid-on-the-block Popeyes one, or the Wendy’s or Chick-fil-A versions.

And the social media managers for the companies reveled in the green light to talk smack to each other.

“We Didn’t Invent The Chicken, Just The Chicken Sandwich!” Chick-fil-A bragged on Twitter. “Bun + Chicken + Pickles = all the ❤️ for the original.”

To which Wendy’s responded: “Ya’ll out here talking about which of these fools has the second best chicken sandwich.”

Popeye’s quick retort: “Sounds like someone just ate one of our biscuits. Cause ya’ll looking thirsty.” (Which frankly seemed as if they were bragging about dry over-salted biscuits? Wendy’s thought so, too, tweeting, “lol, guess that means the food’s dry as the jokes.”)

I became aware of the chicken sandwich war while reading an article in The New Yorker. Helen Rosner, The New Yorker’s roving food correspondent, chronicles it in The Popeyes Chicken Sandwich Is Here to Save America.

The Popeyes chicken sandwich has ascended to the pantheon in record time, not because of a catchy ad campaign or an irresistible pricing scheme but because it is, if Twitter, Instagram, and uncountable blog posts and off-the-cuff reviews are to be believed, the best goddam chicken sandwich in the world. For the past few days, my social-media feeds—which, most of the time, read like 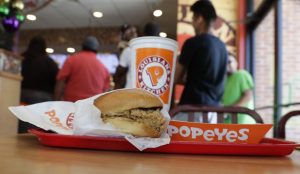 bleak, polyphonic litanies of the falling-apart world—have been overwhelmed instead by discourse about the sandwich.

I’ve watched friends and strangers go through the stages of enlightenment: skepticism, curiosity, anticipation, capitulation, ecstasy. It was, specifically, the ecstasy of Nia-Raquelle Smith, a scholar and food writer in Brooklyn, that pushed me out the door and into my nearest Popeyes. “That Popeyes sandwich had me in my feelings. That’s probably the most emotion I’ve shown all year,” she tweeted, and went on to enumerate its additional virtues: “The chicken is perfectly fried! The breading isn’t falling off. You get crunch in every bite!” The bun is “a buttery cushion”; the sauce “takes it over the top. Is it healthy? NO! But dammit don’t it taste good. It’s truly a gift from the heavens.”

The Lord does indeed work in mysterious ways.