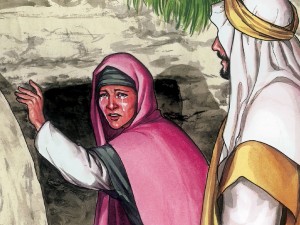 Jesus said to her, “Do not hold on to me, because I have not yet ascended to the Father. But go to my brothers and say to them, ‘I am ascending to my Father and your Father, to my God and your God.’” John 20:17

10 Then the disciples returned to their homes.

11 But Mary stood weeping outside the tomb. As she wept, she bent over to look[a]into the tomb; 12 and she saw two angels in white, sitting where the body of Jesus had been lying, one at the head and the other at the feet. 13 They said to her, “Woman, why are you weeping?” She said to them, “They have taken away my Lord, and I do not know where they have laid him.” 14 When she had said this, she turned around and saw Jesus standing there, but she did not know that it was Jesus. 15 Jesus said to her, “Woman, why are you weeping? Whom are you looking for?” Supposing him to be the gardener, she said to him, “Sir, if you have carried him away, tell me where you have laid him, and I will take him away.” 16 Jesus said to her, “Mary!” She turned and said to him in Hebrew,[b] “Rabbouni!” (which means Teacher). 17 Jesus said to her, “Do not hold on to me, because I have not yet ascended to the Father. But go to my brothers and say to them, ‘I am ascending to my Father and your Father, to my God and your God.’” 18 Mary Magdalene went and announced to the disciples, “I have seen the Lord”; and she told them that he had said these things to her.

Jesus Appears to the Disciples

19 When it was evening on that day, the first day of the week, and the doors of the house where the disciples had met were locked for fear of the Jews, Jesus came and stood among them and said, “Peace be with you.” 20 After he said this, he showed them his hands and his side. Then the disciples rejoiced when they saw the Lord. 21 Jesus said to them again, “Peace be with you. As the Father has sent me, so I send you.” 22 When he had said this, he breathed on them and said to them, “Receive the Holy Spirit. 23 If you forgive the sins of any, they are forgiven them; if you retain the sins of any, they are retained.”

24 But Thomas (who was called the Twin[c]), one of the twelve, was not with them when Jesus came. 25 So the other disciples told him, “We have seen the Lord.” But he said to them, “Unless I see the mark of the nails in his hands, and put my finger in the mark of the nails and my hand in his side, I will not believe.”

26 A week later his disciples were again in the house, and Thomas was with them. Although the doors were shut, Jesus came and stood among them and said, “Peace be with you.” 27 Then he said to Thomas, “Put your finger here and see my hands. Reach out your hand and put it in my side. Do not doubt but believe.”28 Thomas answered him, “My Lord and my God!” 29 Jesus said to him, “Have you believed because you have seen me? Blessed are those who have not seen and yet have come to believe.”

The Purpose of This Book

30 Now Jesus did many other signs in the presence of his disciples, which are not written in this book. 31 But these are written so that you may come to believe[d] that Jesus is the Messiah,[e] the Son of God, and that through believing you may have life in his name.

21 After these things Jesus showed himself again to the disciples by the Sea of Tiberias; and he showed himself in this way. 2 Gathered there together were Simon Peter, Thomas called the Twin,[f] Nathanael of Cana in Galilee, the sons of Zebedee, and two others of his disciples. 3 Simon Peter said to them, “I am going fishing.” They said to him, “We will go with you.” They went out and got into the boat, but that night they caught nothing.

4 Just after daybreak, Jesus stood on the beach; but the disciples did not know that it was Jesus. 5 Jesus said to them, “Children, you have no fish, have you?” They answered him, “No.” 6 He said to them, “Cast the net to the right side of the boat, and you will find some.” So they cast it, and now they were not able to haul it in because there were so many fish. 7 That disciple whom Jesus loved said to Peter, “It is the Lord!” When Simon Peter heard that it was the Lord, he put on some clothes, for he was naked, and jumped into the sea. 8 But the other disciples came in the boat, dragging the net full of fish, for they were not far from the land, only about a hundred yards[g] off.

9 When they had gone ashore, they saw a charcoal fire there, with fish on it, and bread. 10 Jesus said to them, “Bring some of the fish that you have just caught.”11 So Simon Peter went aboard and hauled the net ashore, full of large fish, a hundred fifty-three of them; and though there were so many, the net was not torn.12 Jesus said to them, “Come and have breakfast.” Now none of the disciples dared to ask him, “Who are you?” because they knew it was the Lord. 13 Jesus came and took the bread and gave it to them, and did the same with the fish.14 This was now the third time that Jesus appeared to the disciples after he was raised from the dead.

Jesus and the Beloved Disciple

24 This is the disciple who is testifying to these things and has written them, and we know that his testimony is true. 25 But there are also many other things that Jesus did; if every one of them were written down, I suppose that the world itself could not contain the books that would be written.