Takin’ Celebrate To the Streets 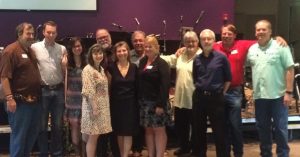 This is a tale of two men. In many ways we are the same. In others, vastly different. Both sons  of the Show Me State, our family roots run deep. Music is in our veins. He produces, I consume.

I came to San Antonio in 1993. In November 1995, Coker UMC became our church home. Traditional worship has never been my thing. Too formal. In 1995, formal dress was still required at work. The last thing I wanted to do on Sunday was put on a tie and head to church for a traditional worship service. However, It was important to Linda and me that Lauren and Amanda grow up in a Christian centered world. While the girls attended Sunday school Linda and I went to traditional worship.

Celebrate in the beginning

Shortly after arriving in San Antonio in 1998, Bob joined Coker UMC. He understood contemporary worship. Under his leadership, Celebrate took

flight October 2000. Held in the gym with plastic stackable chairs. The acoustics were horrible. But this service filled a void. It catered to kids who wanted to worship after Sunday school. Lauren suggested we try it. Pretty soon Linda and I found a Sunday school class and we began worshiping at Celebrate.

Its popularity grew. Construction on a new building with worship space, dubbed the “Upper Room,” was completed in 2004. Celebrate occupied the “Upper Room” from May 2004 until its abrupt cancellation in June 2016. Band members and faithful worshipers had to find new homes. Coker replaced Celebrate with a contemporary service at 9:30. Some found refuge there. Others returned to the traditional service at 11:00. But many, including some key band members found new church homes.

Celebrate Comes to My Church

Last Sunday, our far flung diaspora held a family reunion. We sang, shared inspiring stories, received holy Communion, broke bread, and worshiped Celebrate style. All in the sanctuary of my new church: My “Living Room.”
Share List
This entry was posted in Summer of Smiles. Bookmark the permalink.

5 Responses to Takin’ Celebrate To the Streets