This Week’s Must Watch Tv

This week has some outstanding TV viewing opportunities for music lovers.

“The Voice” will air its final episode of the season Monday night. Results will be announced Tuesday. This season, two of the four finalists chose Christian songs for their semi final performance. As a fan of gospel music this was my personal favorite.

The second episode of AMERICAN EPIC, a three-part historical documentary will air on PBS on Tuesday. May 23 at 8 p.m.

Go inside one of the greatest-ever untold stories: how the ordinary people of America were given the opportunity to make records for the first time.

In the 1920s, as radio took over the pop music business, record companies were forced to leave their studios in major cities in search of new styles and markets. Ranging the mountains, prairies, rural villages, and urban ghettos of America, they discovered a wealth of unexpected talent. The recordings they made of all the ethnic groups of America democratized the nation and gave a voice to everyone. Country singers in the Appalachians, Blues guitarists in the Mississippi Delta, Gospel preachers across the south, Cajun fiddlers in Louisiana, Tejano groups from the Texas Mexico border, Native American drummers in Arizona, and Hawaiian musicians were all recorded. For the first time, a woman picking cotton in Mississippi, a coal miner in Virginia or a tobacco farmer in Tennessee could have their thoughts and feelings heard on records played in living rooms across the country. It was the first time America heard itself.

Over three episodes, narrated by Robert Redford, AMERICAN EPIC rescues this history. The remarkable lives of these seminal musicians are revealed through previously unseen film footage and photographs, and exclusive interviews with music pioneers, their families and eyewitnesses to the era.

Part 2 of 3 travels to the rural South, where Elder Burch, Charley Patton and others record early Delta blues, gospel and protest songs. Also: the Great Flood of 1927 devastates Mississippi River communities, leading to northern migration and such Chicago bluesmen as Howlin’ Wolf. 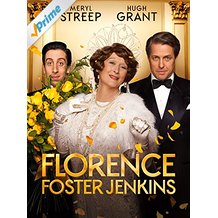 Based on the incredible true story, Meryl Streep delivers a hilarious and touching performance as a New York socialite who dreams of becoming a great opera singer, despite having a hilariously awful singing voice.

3 Responses to This Week’s Must Watch Tv