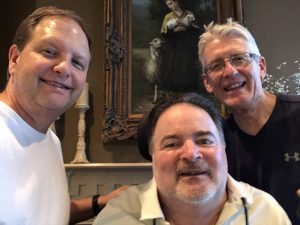 Today I am in the midst of a weekend staycation. Marty and Steve arrived on Friday to spend the weekend with me. I have known lease two fraternity brothers over four decades. We spent our college days at what is now Missouri State University in the late 1970s.

We still get together each year to watch the Super Bowl. However, this is only the second time Marty, Steve and I spent the weekend without our wives. I believe this break in routine is great for all six of us.

7 Responses to My Staycation