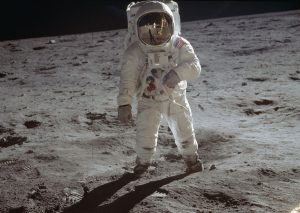 “That’s one small step for man, one giant leap for mankind.” Stepping off the lunar landing module Eagle, Neil Armstrong became the first human to walk on the surface of the moon. Yesterday marked the 50th anniversary of this historic day.

At 9:32 a.m. on July 16, with the world watching, Apollo 11 took off from Kennedy Space Center. Astronauts Neil Armstrong, Edwin Aldrin Jr., and Michael Collins were aboard. Armstrong, a 38-year-old civilian research pilot, was the commander of the mission. After traveling 240,000 miles in 76 hours, Apollo 11 entered into a lunar orbit on July 19. The next day, at 1:46 p.m., the lunar module Eagle, manned by Armstrong and Aldrin, separated from the command module, where Collins remained. Two hours later, the Eagle began its descent to the lunar surface. At 4:18 p.m. the craft touched down on the southwestern edge of the Sea of Tranquility. Armstrong immediately radioed to Mission Control in Houston, Texas, a famous message: “The Eagle has landed.”

To celebrate this celestial milestone here are my top 10 favorite “Moon Tunes”. What are yours?