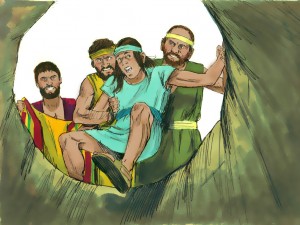 The Symphony in D minor  is the most famous orchestral work and the only mature symphony by the 19th century Belgian composer César Franck. After two years of work, the symphony was completed 22 August 1888. It premiered at the Paris Conservatory on 17 February 1889 under the direction of Jules Garcin. Franck dedicated it to his pupil Henri Duparc.

37 Jacob lived in the land where his father had stayed, the land of Canaan.

Joseph, a young man of seventeen, was tending the flocks with his brothers, the sons of Bilhah and the sons of Zilpah, his father’s wives, and he brought their father a bad report about them.

3 Now Israel loved Joseph more than any of his other sons, because he had been born to him in his old age; and he made an ornate[a] robe for him. 4 When his brothers saw that their father loved him more than any of them, they hated him and could not speak a kind word to him.

5 Joseph had a dream, and when he told it to his brothers, they hated him all the more. 6 He said to them, “Listen to this dream I had: 7 We were binding sheaves of grain out in the field when suddenly my sheaf rose and stood upright, while your sheaves gathered around mine and bowed down to it.”

8 His brothers said to him, “Do you intend to reign over us? Will you actually rule us?” And they hated him all the more because of his dream and what he had said.

10 When he told his father as well as his brothers, his father rebuked him and said, “What is this dream you had? Will your mother and I and your brothers actually come and bow down to the ground before you?” 11 His brothers were jealous of him,but his father kept the matter in mind.

Joseph Sold by His Brothers

14 So he said to him, “Go and see if all is well with your brothers and with the flocks, and bring word back to me.” Then he sent him off from the Valley of Hebron.

When Joseph arrived at Shechem, 15 a man found him wandering around in the fields and asked him, “What are you looking for?”

16 He replied, “I’m looking for my brothers. Can you tell me where they are grazing their flocks?”

So Joseph went after his brothers and found them near Dothan. 18 But they saw him in the distance, and before he reached them, they plotted to kill him.

19 “Here comes that dreamer!” they said to each other. 20 “Come now, let’s kill him and throw him into one of these cisternsand say that a ferocious animal devoured him. Then we’ll see what comes of his dreams.”

23 So when Joseph came to his brothers, they stripped him of his robe—the ornate robe he was wearing— 24 and they took him and threw him into the cistern. The cistern was empty; there was no water in it.

25 As they sat down to eat their meal, they looked up and saw a caravan of Ishmaelites coming from Gilead. Their camels were loaded with spices, balm and myrrh, and they were on their way to take them down to Egypt.

26 Judah said to his brothers, “What will we gain if we kill our brother and cover up his blood? 27 Come, let’s sell him to the Ishmaelites and not lay our hands on him; after all, he is our brother, our own flesh and blood.” His brothers agreed.

28 So when the Midianite merchants came by, his brothers pulled Joseph up out of the cistern and sold him for twenty shekels[b] of silver to the Ishmaelites, who took him to Egypt.

29 When Reuben returned to the cistern and saw that Joseph was not there, he tore his clothes. 30 He went back to his brothers and said, “The boy isn’t there! Where can I turn now?”

31 Then they got Joseph’s robe, slaughtered a goat and dipped the robe in the blood. 32 They took the ornate robe back to their father and said, “We found this. Examine it to see whether it is your son’s robe.”

33 He recognized it and said, “It is my son’s robe! Some ferocious animal has devoured him. Joseph has surely been torn to pieces.”

34 Then Jacob tore his clothes, put on sackcloth and mourned for his son many days. 35 All his sons and daughters came to comfort him, but he refused to be comforted. “No,” he said, “I will continue to mourn until I join my son in the grave.” So his father wept for him.

36 Meanwhile, the Midianites[c] sold Joseph in Egypt to Potiphar, one of Pharaoh’s officials, the captain of the guard.