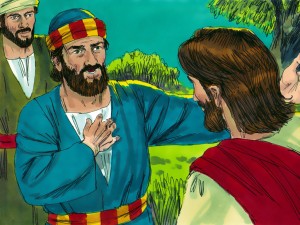 “I made your name known to them, and I will make it known, so that the love with which you have loved me may be in them, and I in them.” John 17:26

Pulcinella is a ballet by Igor Stravinsky based on an 18th-century play—Pulcinella is a character originating from Commedia dell’arte. The ballet premiered at the Paris Opera on 15 May 1920 under the baton of Ernest Ansermet. The dancer Léonide Massine created both the libretto and choreography, and Pablo Picasso designed the original costumes and sets. It was commissioned by Sergei Diaghilev.

16 “I have said these things to you to keep you from stumbling. 2 They will put you out of the synagogues. Indeed, an hour is coming when those who kill you will think that by doing so they are offering worship to God. 3 And they will do this because they have not known the Father or me. 4 But I have said these things to you so that when their hour comes you may remember that I told you about them.

The Work of the Spirit

“I did not say these things to you from the beginning, because I was with you.5 But now I am going to him who sent me; yet none of you asks me, ‘Where are you going?’ 6 But because I have said these things to you, sorrow has filled your hearts. 7 Nevertheless I tell you the truth: it is to your advantage that I go away, for if I do not go away, the Advocate[a] will not come to you; but if I go, I will send him to you. 8 And when he comes, he will prove the world wrong about[b] sin and righteousness and judgment: 9 about sin, because they do not believe in me;10 about righteousness, because I am going to the Father and you will see me no longer; 11 about judgment, because the ruler of this world has been condemned.

Sorrow Will Turn into Joy

Peace for the Disciples

25 “I have said these things to you in figures of speech. The hour is coming when I will no longer speak to you in figures, but will tell you plainly of the Father. 26 On that day you will ask in my name. I do not say to you that I will ask the Father on your behalf; 27 for the Father himself loves you, because you have loved me and have believed that I came from God.[e] 28 I came from the Father and have come into the world; again, I am leaving the world and am going to the Father.”

29 His disciples said, “Yes, now you are speaking plainly, not in any figure of speech! 30 Now we know that you know all things, and do not need to have anyone question you; by this we believe that you came from God.” 31 Jesus answered them, “Do you now believe? 32 The hour is coming, indeed it has come, when you will be scattered, each one to his home, and you will leave me alone. Yet I am not alone because the Father is with me. 33 I have said this to you, so that in me you may have peace. In the world you face persecution. But take courage; I have conquered the world!”

Jesus Prays for His Disciples

17 After Jesus had spoken these words, he looked up to heaven and said, “Father, the hour has come; glorify your Son so that the Son may glorify you,2 since you have given him authority over all people,[f] to give eternal life to all whom you have given him. 3 And this is eternal life, that they may know you, the only true God, and Jesus Christ whom you have sent. 4 I glorified you on earth by finishing the work that you gave me to do. 5 So now, Father, glorify me in your own presence with the glory that I had in your presence before the world existed.”

6 “I have made your name known to those whom you gave me from the world. They were yours, and you gave them to me, and they have kept your word. 7 Now they know that everything you have given me is from you; 8 for the words that you gave to me I have given to them, and they have received them and know in truth that I came from you; and they have believed that you sent me. 9 I am asking on their behalf; I am not asking on behalf of the world, but on behalf of those whom you gave me, because they are yours. 10 All mine are yours, and yours are mine; and I have been glorified in them. 11 And now I am no longer in the world, but they are in the world, and I am coming to you. Holy Father, protect them in your name that you have given me, so that they may be one, as we are one. 12 While I was with them, I protected them in your name that[g] you have given me. I guarded them, and not one of them was lost except the one destined to be lost,[h] so that the scripture might be fulfilled. 13 But now I am coming to you, and I speak these things in the world so that they may have my joy made complete in themselves.[i]14 I have given them your word, and the world has hated them because they do not belong to the world, just as I do not belong to the world. 15 I am not asking you to take them out of the world, but I ask you to protect them from the evil one.[j]16 They do not belong to the world, just as I do not belong to the world. 17 Sanctify them in the truth; your word is truth. 18 As you have sent me into the world, so I have sent them into the world. 19 And for their sakes I sanctify myself, so that they also may be sanctified in truth.”

25 “Righteous Father, the world does not know you, but I know you; and these know that you have sent me. 26 I made your name known to them, and I will make it known, so that the love with which you have loved me may be in them, and I in them.”

The Betrayal and Arrest of Jesus

18 After Jesus had spoken these words, he went out with his disciples across the Kidron valley to a place where there was a garden, which he and his disciples entered. 2 Now Judas, who betrayed him, also knew the place, because Jesus often met there with his disciples. 3 So Judas brought a detachment of soldiers together with police from the chief priests and the Pharisees, and they came there with lanterns and torches and weapons. 4 Then Jesus, knowing all that was to happen to him, came forward and asked them, “Whom are you looking for?”5 They answered, “Jesus of Nazareth.”[l] Jesus replied, “I am he.”[m] Judas, who betrayed him, was standing with them. 6 When Jesus[n] said to them, “I am he,”[o]they stepped back and fell to the ground. 7 Again he asked them, “Whom are you looking for?” And they said, “Jesus of Nazareth.”[p] 8 Jesus answered, “I told you that I am he.[q] So if you are looking for me, let these men go.” 9 This was to fulfill the word that he had spoken, “I did not lose a single one of those whom you gave me.” 10 Then Simon Peter, who had a sword, drew it, struck the high priest’s slave, and cut off his right ear. The slave’s name was Malchus. 11 Jesus said to Peter, “Put your sword back into its sheath. Am I not to drink the cup that the Father has given me?”

Jesus before the High Priest

12 So the soldiers, their officer, and the Jewish police arrested Jesus and bound him. 13 First they took him to Annas, who was the father-in-law of Caiaphas, the high priest that year. 14 Caiaphas was the one who had advised the Jews that it was better to have one person die for the people.

15 Simon Peter and another disciple followed Jesus. Since that disciple was known to the high priest, he went with Jesus into the courtyard of the high priest, 16 but Peter was standing outside at the gate. So the other disciple, who was known to the high priest, went out, spoke to the woman who guarded the gate, and brought Peter in. 17 The woman said to Peter, “You are not also one of this man’s disciples, are you?” He said, “I am not.” 18 Now the slaves and the police had made a charcoal fire because it was cold, and they were standing around it and warming themselves. Peter also was standing with them and warming himself.