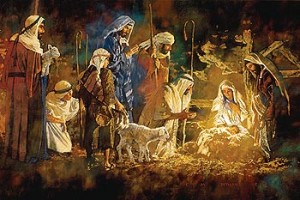 While Christmas today is considered one of the primary holidays of the Christian faith, it was not always this way. During medieval times, Christmas was a much more solemn affair. It was a day of prayer and reflection, and was observed primarily with a special mass – the “Cristes Maesee,” or the “Mass of Christ.”

By the Middles Ages (the 1200s), most people had lost interest in celebrating Christmas altogether.

This was changed by St. Francis of Assisi when, in 1223, he started his Nativity Plays in Italy. The people in the plays sang songs or ‘canticles’ that told the story during the plays. Sometimes, the choruses of these new carols were in Latin; but normally they were all in a language that the people watching the play could understand and join in! The new carols spread to France, Spain, Germany, and other European countries.

The biggest celebration of the season during the Renaissance, was Twelfth Night, the night before Epiphany. It was held that the Epiphany marked the date, twelve days following Christmas when the Magi found the newborn Christ child and presented him with 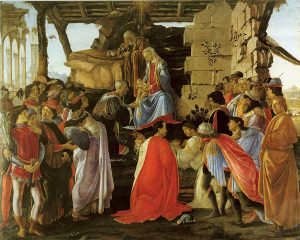 gifts. The modern custom of exchanging gifts at Christmas is generally believed to be a continuance of the tradition started by the three Wise Men.

The so-called “Twelve Days of Christmas” began at sundown on December 24th and lasted until Epiphany, on January 6th. During the Renaissance, Twelfth Night marked the ‘official’ end of the Christmas (or winter) holiday season and was the traditional day for taking down Christmas decorations.

From Twelfth Night During the Renaissance

During the Renaissance music was taken outside the walls of the church and into the streets. Christian music was translated from Latin to the language of the common people.

What other important change do you notice when you compare Renaissance music with the music of the medieval ages? Enter your observations below.

One of the earliest and best-known carols of the Renaissance era is “In Dulci Jubilo.” It is a traditional Christmas carol whose name means “In sweet rejoicing.” In its original setting, the carol is a macaronic (mixed language) text of German and Latin dating from the Middle Ages. Subsequent translations into English, such as J.M. Neale’s arrangement “Good Christian Men, Rejoice” have increased its popularity, and Robert Pearsall’s 1837 macaronic translation is a mainstay of the Christmas Nine Lessons and Carols repertoire. J.S. Bach’s chorale prelude based on the tune (BWV 729) is also a traditional postlude for Christmas services. (Wikipedia)